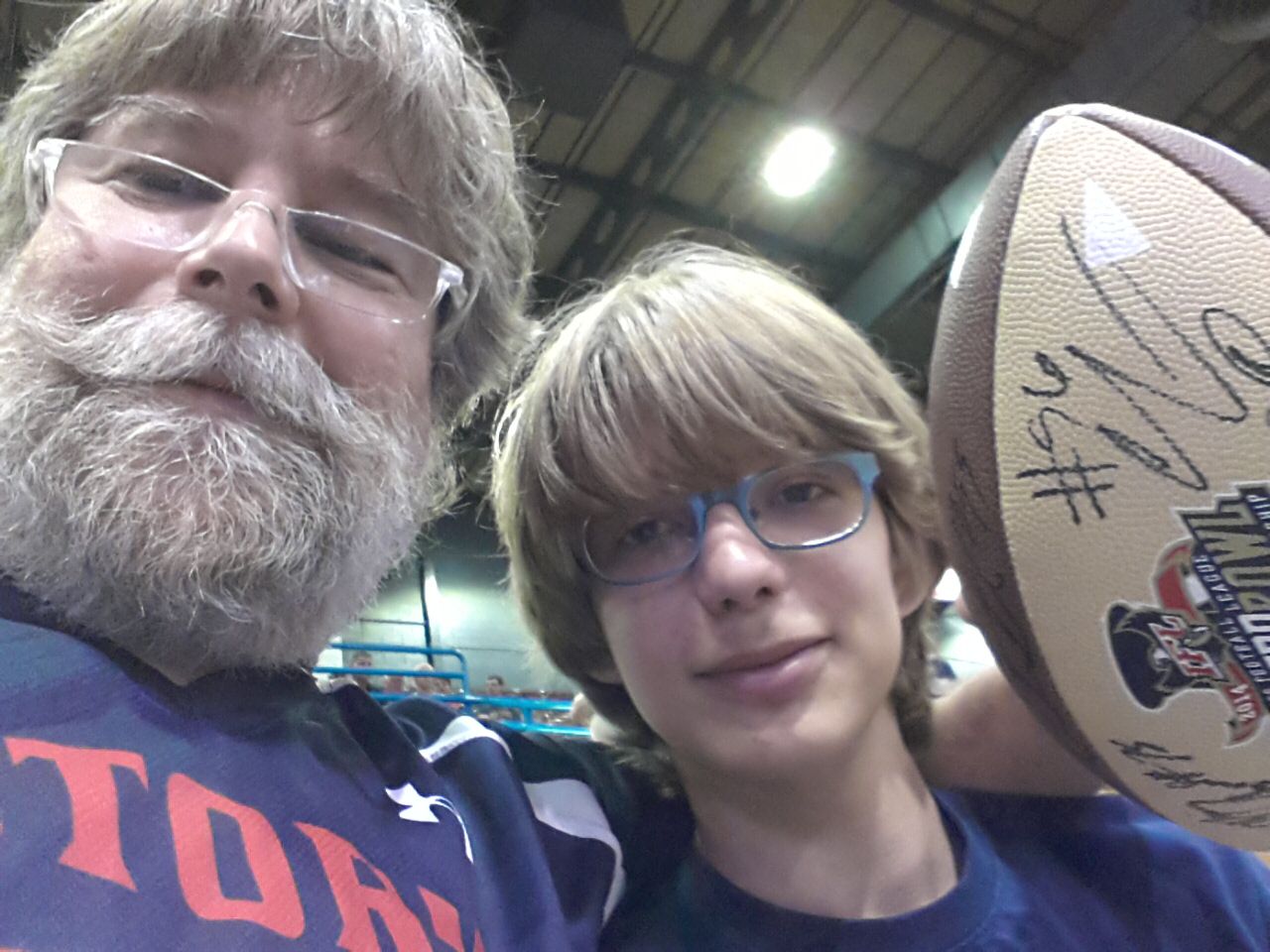 We are big fans of the Sioux Falls Storm.  I try to be an artist, but mostly I design stuff (logos, graphics, websites and marketing campaigns).  My profile is at Doug-Peters.com.  The guy pictured with me in the above photo is my favorite son, Max.  If I had more kids, I'd take them to the home games, too.  We always have a great time.

Football has always been the sport I loved more than almost any other.  I was torn almost every summer between leaving the lake a week or two early, returning to Omaha to try out for the school's football team, or staying at Pickerel Lake, waterskiing, and enjoying life with my beautiful girlfriend, Ruth.  But I loved waterskiing and Ruth more than football alone.

I wound-up staying in Omaha one summer, but it was to work and race motorcycles, not to get into the football program.  Ruth was angry with me from then on, after that.

I have been a fan of football since I lived in Staten Island, NYC, New York and witnessed the Jets' amazing season with Joe Namath that culminated in a predicted win at Super Bowl III, fullfilling Joe's promise of a direly needed American Football League victory.  Without that victory under their belt, the Super Bowl would not have meant what it does today, as the whole American Football Conference would have been considered a laughing stock and the Super Bowl a joke contest.  It was the prediction of a victory from Namath that created a great stir in the press like no one else could, and fulfilling that promise with a win that made the National Football League realize that they in fact did not outright own the sport, and the merger between the NFL and the AFL was saved because of it (for more info, see 'The True Story of Luckiest Football Game Ever Won').

I hated the Pittsburg Steelers after they took down the Vikings in Super Bowl IX, but turned into a fan as I enjoyed the antics and appreciation for the game that Steerlers' QB Terry Bradshaw had, which I personally believe led to the team's succesful domination of the sport  (Super Bowl victors in 1975, 1976, 1979 & 1980) producing the NFL's first football dynasty.

Omaha is much closer to Kansas City, so you might think that I would've wound-up a Chiefs fan, but my family roots were all in South Dakota and Minnesota, so when it comes to the NFC, there is only one team for me, the Vikings, who played their first 'home' exhibition game on Howard Wood Field in Sioux Falls South Dakota, when the Hubert Humphery Metrodome wasn't quite finished.

Now the Vikings are going to a new state-of-the-art stadium, and I can't wait to see them play there, with Teddy Bridgewater at the helm.

My son and I have been going to games since he was very young.  I believe we discovered the Storm and watched them at the end of their season in 2006, culminating with a victory for the United Indoor Football Championship under Coach Kurtiss Riggs guidance and Terrance Bryant's artistic pass delivery.  From then on, we were hooked.  I have made it to almost every home game, since then.  My son Max sometimes competes in math or scholastics, so I know I have missed one game, and he has missed a couple, but we are always there at the game when we can be.

I would love to post more videos, but it seems that the Storm doesn't like anyone taking video of the team play and posting it online anymore. The last couple of years in the Sioux Falls Arena it was OK for us to share videos of the team at the game, so I do have some videos I can post. This video restriction actually hampers me greatly and leaves the site a bit useless, as all I can do is repost officially shared videos for fear of Copyright infingement, and as an artist, that is a tremendous sin.  After all, I need my artwork, photographs, videos, text copy, fonts and designs respected, too.  But the ban on video recording actually doesn't help the team because then their video is used everywhere, and that dillutes their brand, because they should be the definitive source.  Since we can't record in the new Denny Sanford Premier Center, instead we repost what we can, and then their video just winds-up on every fan site, blog and facebook page and it gets monotonous with no new angles, no different perspective, no change in the crowd, etc.

Oh well, I still love the team and I think they do great work.  I took classes at Sioux Falls College when I was at Augustana College, since we had no New Media Department at Augie.  Kurtiss Riggs was QB of Sioux Falls College's football team and on his way to an NAIA conference championship, so we had him or his coach into the television studio for interviews on Sportsline a couple of times.  I was quite impressed with them both.

Since then, Sioux Falls College has become University of Sioux Falls and Augustana College renamed Augustana Univesity.  It's a marketing thing, but unfortunate, I think.   As a marketing guy, I understand the sense it makes, but as an artist I think they lost a big part of their tradition that will be extremely tough to replace, if ever.

Nevertheless, the world goes on and the Storm makes it a much less boring adventure.  I think my son and I will be Storm fans for the rest of our lives. 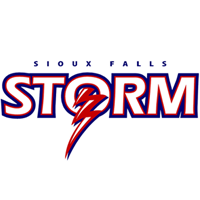